DETROIT -- Police officers in two Detroit suburbs are accused of beating a motorist who was suffering a diabetic episode on a freeway.

Lawyer Arnold Reed says 59-year-old Ernest Griglen had brain surgery after the June 15 encounter with police and has been clinging to life with help from a ventilator.

Reed filed a lawsuit Monday in federal court seeking at least $20 million from Allen Park and Dearborn police. He says officers mistakenly believed Griglen was resisting arrest when he was having a major medical problem.

Posted by Francis Holland at 7:32 AM 4 comments: Links to this post 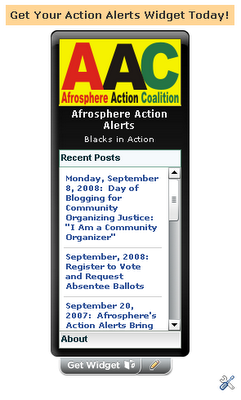 Villager at the AfroSpear’s Electronic Village blog urgently brings to our attention the case of Troy Davis, a Black man who is scheduled to be executed just twelve days from now in Georgia, “even though his serious claims of innocence have never been heard in court.”

Amnesty International USA says, “The case against him consisted entirely of witness testimony which contained inconsistencies even during the trial,” and Amnesty urgest us to write automated letters online to the Georgia State Board of Pardons and Paroles. They provide a sample letter. The European Parliament says, “there is abundant proof of his innocence, material evidence against him has never been produced and seven witnesses for the prosecution have retracted their testimony.”

Why Did Male Sherriff's Strip This Woman of All of Her Clothers,, and Then Leave Her Naked for Six Hours?

Posted by Francis Holland at 9:25 PM 2 comments: Links to this post