Hat Tip to Tasered While Black:

Check out this article on the need for San Angelo Police Department to rethink Tasers. Based on the article, Representative Lon Burnam (D-Fort Worth) filed four bills in the Texas House last session concerning Tasers. Eddie and Texas Afrospear members did you know about this?

MediaTakeOut spoke exclusively with Tank's business associate Ira Dewitt, the CEO of Notifi Music Group, who witnessed the entire incident. Ira explained, "We were leaving the NBA All Star Game heading to an afterparty at the House Of Blues ... we were walking in that direction and the cops came and completely blocked us." She continued, "They got all in our face and got really belligerent ... Apparently there was a shooting in the area. "

That's when, according to Ira - all hell broke loose. "Tank was like 'Why are you gonna be like that' and we started walking away. But they grabbed Tank and threw him against the wall. [The cops] bent one of his arms up and the other arm back and asked him to do something. Tank told them that he couldn't and before you knew it there were three cops all over him ... and they tased him."

H/T The MIXX.com and Rhymes With Snitch are reporting on the arrest outside the House of Blues in New Orleans. Stereohyped is also reporting on this story, so is the blog Bossip.

An inside source has told Bossip about a shocking event that took place last night outside of a New Orleans nightclub. The source, a woman, and Tank were leaving the club and walking to meet their driver when they encountered a police roadblock. Apparently, there’d been a shooting. According to the source, the police were very rude in telling the two that they couldn’t walk through the area. Like a gentleman, Tank spoke up for himself and his lady friend, telling the cops they didn’t have to speak to them in the way they did.

The two were walking away from the scene when out of nowwhere 3 cops tackled Tank and began using tasers on him. He was arrested on a number of counts, including disorderly conduct, and just released on bail moments ago. More HERE

Cross Posted on Tasered While Black 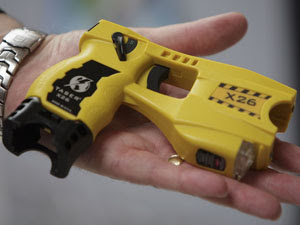 -- police are about to issue Tasers to all 370 officers on the force. Police say they are a safe way to stop a potential threat, but some people say Tasers are dangerous and sometimes deadly. Police spokesman Tom Walsh says the Taser is stronger than a verbal order and less dangerous than a gun, especially in the case of a violent or unstable subject.Currently, 140 police officers carry Tasers. The addition of another 230 will bring the total to 37- -- one for every officer on the force.vThe 230 new Tasers will cost $210,000 -- paid for with money seized during drug raids or other special investigations. The St. Paul City Council will vote Wednesday on whether to authorize the purchase of the Tasers, which they are likely to do. Four years ago, police unveiled Tasers at a media event and now the Taser is in high demand. But questions about Tasers can’t escape law enforcement.


Scott Selmer, of the Urban League in , believes Tasers could cause unnecessary harm if used too soon. “Sensitivity training is critical,” Selmer said. “Have some thought that goes into any encounter (police) may have.” Shortly after the new shipment of Tasers arrives in , the Republican National Convention will come to town, and with it, protestors who may or may not get violent. More on St. Paul Police Orders Tasers For Every Officer

AAPP: One has to wonder what are the plans for the Democratic National Convention if the superdelegates and the DNC get it all wrong?

How many tasers will be deployed? Don't Tase Me Bro!

Tasered While Black for coming after police with a " fly swatter."

Tasered While Black says: You got to be kidding me! Sounds like excessive force to us. Black folks need to organize to get police departments to have stringent policies around the use of Tasers. Check out this incident and let us know what you think. You have to read all the links to this story.

Tedral Thompson claims seven Woodland police officers burst into his home with a search warrant, refused to let his wife put on a blouse – and then stunned him with three Taser guns.

Yolo County court records say only one officer fired a stun gun to protect a colleague, and that it happened as Thompson came at him cursing and carrying a fly swatter.

Thompson has filed a lawsuit in Yolo Superior Court alleging officers used excessive force and falsely arrested him for obstructing an officer as a "cover up." More HERE

Cross Posted on Tasered While Black and the Police Brutality Blog

If Police Think You Deserve Punishment, You May Not Get a Trial