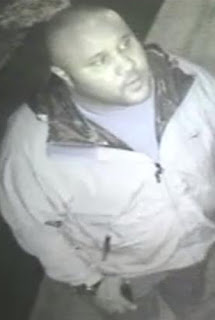 A Black ex-officer of the Los Angeles Police Department says that witnessing police brutality and fellow cops referring to Blacks using the "N" word prompted him to file reports against the officers in question.  And then the LAPD fired him, accusing him of filing false reports, although no one has explained why Dorner would file a false report under circumstances or what he would have to gain by doing so.

The officer has drawn national attention to his case by promising to kill LAPD police officers involved, as well as members of their families, and by allegedly actually killing three people.
The New York Times linked to an online manifesto by the fired officer, Christopher J. Dorner, in which the ex-officer uses the word "nigger" eight times while describing how he and other Blacks were treated, in his presence, by members of the LAPD.

Ex-officer Dorner alleges that his present rampage is color-aroused and based in the color aroused ideation, emotion and behavior of people in the LA police department.  However, the New York Times did not mention the color-aroused nature of the case until the LA Police acknowledged it and determined to reopen the investigation into Mr. Dorner's allegations.


The Los Angeles Police Department will reopen its investigation into the 2007 episode that led to the firing of Christopher J. Dorner, the former police officer who is wanted in three killings, department officials said Saturday night. Mr. Dorner pledged revenge against Los Angeles police officers in a manifesto he posted online, in which he also claimed that racism in the department had led to his dismissal. He is wanted in connection with the killing of a former police captain’s daughter and her fiancé last Sunday and the shooting death of a Riverside, Calif., police officer on Thursday morning.

“I am aware of the ghosts of the L.A.P.D.’s past, and one of my biggest concerns is that they will be resurrected by Dorner’s allegations of racism within the department,” Chief Charlie Beck said in a written statement.

“Therefore, I feel we need to also publicly address Dorner’s allegations regarding his termination,” he said. “I do this not to appease a murderer. I do it to reassure the public that their Police Department is transparent and fair in all the things we do.”

The Times has, to my knowledge, failed to report the skin color of the victim of the alleged kicking incident, even though this fact might  be essential to understanding Dorner's reaction to the incident and the LAPD's reaction to his complaint.

Had the LAPD dealt with the allegations of Christopher J. Dorner more seriously when they occurred, whether they were based on fact or not, then this rampage might not have occurred.

Whether or not a fellow officer kicked a suspect who was on the ground, as Dorner alleges, the LAPD decision to fire him for even asserting that it happened would predictably dissuade other officers from reporting abuses they witnessed.  That attitude on the part of the LAPD seems as though it might partially explain why Mr. Dorner believes a rampage is necessary.  Dorner's reaction is not so strange when one recalls that that were generalized riots in LA in 1992 over similar questions of police brutality that was often color-aroused.
Posted by Francis Holland at 6:49 AM 1 comment:

The New York Times reports that a Black, male ex-LAPD officer and ex-Navy reservist has gone on a murderous rampage after explaining why in a essay he posted to the Internet.  In the essay, Christopher Jordan Dorner, 33, asserts that feelings of powerlessness in the face of color-aroused LAPD behavior drove him to begin killing.  The Times characterizes the ex-officer's explanation as "a rambling and threatening note" but the Times fails to report Dorners subjective belief that extreme color-arousal in the LAPD led to the killing spree.

Among the color-aroused incidents Dorney reports:


The internal affairs investigation in the academy involving Schefres was spurned by a complaint that I had initiated toward two fellow recruit/offifcers. While on a assigned patrol footbeat in Hollywood Division, Officers Hermilio Buridios IV and Marlon Magana (both current LAPD officers) decided that they would voice their personal feelings about the black community. While traveling back to the station in a 12 passenger van I heard Magana refer to another individual as a nigger. I wasn't sure if I heard correctly as there were many conversations in the van that was compiled of at least 8 officers and he was sitting in the very rear and me in the very front. Even with the multiple conversations and ambient noise I heard Officer Magana call an indivdual a nigger again. Now that I had confirmed it, I told Magana not to use that word again. I explained that it was a well known offensive word that should not be used by anyone. He replied, "I'll say it when I want". Officer Burdios, a friend of his, also stated that he would say nigger when he wanted. At that point I jumped over my front passenger seat and two other officers where I placed my hands around Burdios' neck and squeezed. I stated to Burdios, "Don't fucking say that". At that point there was pushing and shoving and we were separated by several other officers. What I should have done, was put a Winchester Ranger SXT 9mm 147 grain bullet in his skull and Officer Magana's skull. The Situation would have been resolved effective, immediately. The sad thing about this incident was that when Detective Ty from internal affairs investigated this incident only (1) officer (unknown) in the van other than myself had statements constistent with what actually happened. The other six officers (John Carey, Gary Parker, Jacob Waks, Abraham Schefres and names I have forgotten) all stated they heard nothing and saw nothing. Shame on every one of you. Shame on Detective Ty (same ethnicity as Burdios) for creating a separate 1.28 formal complaint against me (Schefres complaint) in retaliation for initiating the complaint against Burdios and Magana. Don't retaliate against honest officers for breaking your so called blue line. I hope your son Ryan Ty, who I knew, is a better officer than you, Detective Ty.The saddest part of this ordeal was that Officer Burdios and Magana were only given 22 day suspensions and are still LAPD officers to this day. That day, the LAPD stated that it is acceptable for fellow officers to call black officers niggers to their face and you will receive a slap on the wrist. Even sadder is that during that 22 day suspension Buridios and Magana received is that the LAPPL (Los Angeles Police Protective League) paid the officers their salaries while they were suspended. When I took a two day suspension for an accidental discharge, I took my suspension and never applied for a league salary. Its called integrity.

In a sense, it barely matters whether Dorner's accounts are true.  It seems likely clear that color-aroused experiences, emotion and ideation play a significant role in his own understanding of why he has done what he has.
Posted by Francis Holland at 1:18 PM 3 comments: