If You're Black in America, Your Days Are Numbered

When you're a Black man in the United States, your days are numbered. Due to poorer health care and the stress that comes from incessantly fighting color-aroused oppression, as well as self-destructiveness, our life expectancy is 13 years less than a white woman's. Some of us are on our way to an early grave or the emergency room because of rampant police violence with impunity, and Ron and Roy Pettaway could attest that we really can't predict which of us it will be next.

During the riots, a member of the Black Panthers told me to keep my head down below window height, so as not to get hit by a bullet. Well, that is a metaphor for how all Black people live in the United States. In addition to literal stray bullets, we have stray color-aroused police, stray environmental racism, stray color-aroused denial of medical care, stray denial of employment and housing . . . How long can we keep our heads down, and for what ultimate purpose?

A lot of Panthers from back in day are still engaged in a revolutionary purpose: quietly going to work each day in the helping professions (medicine, law, government services) that never admitted Black people before the 1960's.
Posted by Francis Holland at 8:40 AM 1 comment:

Is There Any Alternative to Civil Disobedience During Traffic Stops?

Did the Black Panther Party wait until they had established a "pattern or practice" in court before they defended Black people against color-aroused police oppression in the courts? Of course not, because it is in the nature of systematic color-aroused oppression that the institutions of the oppressive society are often unwilling to hear the pleas of the oppressed.

That's why Black people sat in at lunch counters and in segregated buses during Jim Crow: because non-violent civil disobedience was necessary to pressure the institutions of society to recognize and address the problem.

Should Black slaves have waited for a court decree before violently or non-violently obtaining their freedom and escaping to the North?

In fact, resisting the police during the traffic arrest may have been the only way this woman had of publicizing nationally both the systematic persecution of Black drivers and the unnecessary and potentially lethal use of tasers in non-violent situations. We should give this woman an award for bringing TWO civil rights issues to national attention, for having the courage to take action while the rest of us are still obediently stepping off the sidewalk in deference and submission to Mr. Charlie.

Even as we acknowledge that, statistically, police repression of Blacks is systematic and endemic, we still have a disconnect: We still demand that individual Blacks obey the police, unable or unwilling to see these individual cases in the larger context of systematic police repression.
Posted by Francis Holland at 11:53 AM No comments:

How Much Should Black People Submit to Police Oppression? 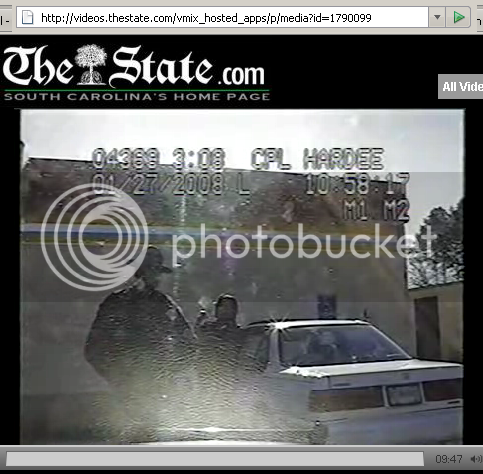 "Just because you're wearing your little suit, that doesn't mean nothing!"
-- Black Woman Tased in this video!

This video demonstrates that potentially lethal force is being used on drivers who are not suspected of a crime (failure to wear a seat belt is a civil infraction in most places) and who pose no significant threat of harm to police officers or members of the public. This potentially lethal force is being used punitively, to administer an "attitude adjustment".

Would this officer's request that this Black woman submit to arrest be "unreasonable" if the request was was subsequent to a color-aroused traffic stop? Is this arrest not the fruit of the poisonous color arousal tree?

Hypothetically, (not in this video) if a police officer TELLS a Black woman that she is being arrested because she is Black, should the Black woman (a) submit to the arrest, (b) non-violently resist with passive civil disobedience, or (c) resist with force. Is your answer based on moral obligation, societal norms, or fear of police violence? Hypothetically, is it ever morally justified to passively and non-violently resist after an officer after he has said that he is going to arrest your? E.G. sitting down and refusing to move? If so, when?

I disagree with the assessment that this woman was "ill-tempered" or "mouthy." Look at what happened. Someone accosted her on the street and obliged her to stop her car because she was (1) Black, (2) in an old car, and pretextually (3) not wearing her seat belt.

It should infuriate anyone to be stopped for "driving while Black", on the pretext of a failure to wear a seatbelt. This is harassment based on skin color, but she can't prove it to the satisfaction of a white judge, an all-white jury, white courts and a 99% white US Senate, or the 43-term white male monopoly of the presidency.

Just as Black people were once forced to step off the curb to let white people pass, (we knew this was required of us), the constant police pressure on Black people who are not obviously doing anything abnormal is a way of keeping us "in our place," of constantly reminding us that we are not as good as they are and we are utterly subject to their (white peoples') will.

And yet, in the face of this lifelong provocation and constant white menace, the Black woman peacefully stopped her car, NEVER swore at the police officer, and she never cursed him. Of course she was afraid! She knew that this officer, as a representative of white oppression, could shoot her dead and continue to collect his pay.

Nonetheless, she NEVER, EVER made a threatening move toward him, and she NEVER, EVER tried to flee. She was utterly under control of herself, but she was unwilling to submit to the police officer's illegitimate authority. (His authority was illegitimate, because his reason for stopping her was to enforce Black submission to white power, not to enforce seat belt use.)

This Black woman DID threaten to file a law suit against the police for their behavior. What that wrong? If she has a right to file a law suit, why shouldn't she warn the officers before they engage in the behavior upon which the suit would be based? The truth is, we believe that we should NEVER speak about our "rights" to police officers, because it will result in a "beat down." If filing a law suit is the appropriate remedy, then warning that we MIGHT file a lawsuit is also appropriate behavior. Isn't that what we do when a store refuses to honor a guarantee? Aren't the police theoretically supposed to honor society's guaranties to us?

We are NOT WRONG for asking a police officer for his badge number. The Police Officer is wrong for retaliating against us when we do so. Again, society's and our own insistence that we are to blame when the police oppress us may help to explain our relatively higher rates of high blood pressure in the United States.

This is why I cannot understand anyone saying she was "ill-tempered" or "mouthy." We are so accustomed to being absolutely obedient that the slightest expression of how we actually feel and what we really think seems like an outrageous display of arrogance to us. We are like fearful Black parents begging our children not to use the "white" bathroom, the highways that all of us should share equally according to the US Constitution, because we should know that, as Blacks, we are subject to restraint and harassment at any time, for any reason or for no reason. We should "know our place" and teach our children "their place."

If we don't, it is OUR FAULT that Mr. Charlie lyches Emmet Till for failing to step off the sidewalk and let the good white people pass. We all have choices, but the oppressive behavior of white people is NEVER our fault. Our belief that it is and our acceptance of responsibility for white people's actions may help to explain why Black people in the United States have high blood pressure so much more often than whites.

If the officer's concern was society's concern for this woman's safety, as expressed by the requirement that people wear seat belts, then was electrocuting this woman the most appropriate expression of society's concern for her? As many people have said earlier, this was all about CONTROL - and the disproportionate traffic stops of Black people derive from and are a direct function of the disproportionate control and submission that Mr. Charlie requires of Black people.

Using this video as a object lesson in which to discuss our society generally, I believe there is a valid argument that this Black woman, through this officer, is refusing to submit totally to a white society that she knows is oppressing her.

As for the specific issue of tasers, I don't think we can make any headway against tasers until and unless we acknowledge that it is simply wrong to use potentially lethal force on passive and non-violent people. In a perfect world we could implement carefully written rules as to the use of electric shocks on people who have not been convicted of any crime, however this is NOT a perfect world. When authorized to shock anyone, police will inevitably disproportionately shock Black people, just as they disproportionately shoot Black people:
Any attempt to inform people about interacting with law enforcement should start by explaining to them that there are two million Americans behind bars, more than in any other nation in the world, and 49% of those people are Black.

The disproportionate representation of black Americans in the U.S. criminal justice system is well documented.17 Blacks comprise 13 percent of the national population, but 30 percent of people arrested, 41 percent of people in jail,18 and 49 percent of those in prison.19
Human Rights Watch, "Incarceration and Race"

Blacks should try very hard not to become a part of these arrest and incarceration statistics, but one in ten of us do anyway.

So, be careful not to make the mistakes that this woman in the video may have made before she was electrocuted:

Don't drive an old car, because it attracts the attention of police;

If you're Black, don't drive a new car, because it will attract the attention of police.

Don't fail to pay civil fines, even though they may be equal to one week's pay and are the same for extremely poor people as for extremely wealthy ones;

Don't drive in the United States of America;

Don't live in the United States of America.
These simple precautions can prevent Black people from becoming incarceration statistics.
Posted by Francis Holland at 2:35 PM 5 comments: