The bail should have been set sufficiently high to keep Zimmerman locked up.

The following has been cut and pasted from the "Intersection of Madness and Reality" blog, which is where you will have to go if you wish to tell Rappa that his opinion is backward on this issue of Zimmerman's bail.

Why?  Contrary to what Rappa says at his blog (quoted below), George Zimmerman admits he killed a young man (a child under law) and presumably would do the same thing again if the same circumstances arose again.  His defense is going to be that he had a legal right to act exactly as he did, when he followed and confronted an unarmed Black child in the dark and then shot the unarmed Black teenager to death.

Zimmerman simply should not be on the streets, free to engage in the same activity again, until a judge and a jury determine whether it is lawful and proper to kill Black children under these circumstances.  Because he has a long-time habit of engaging in the activities that led to the death of Trayvon Martin, there is a very real and imminent danger and reality that he could do the same thing again while out on bail.

Bail should be based on the danger a man poses to the community.  Zimmerman has acknowledged that he killed a man under circumstances that most people believe were unnecessary.  So, he poses an unacceptable risk today because he might do the same thing again. 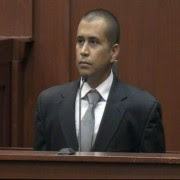 This morning I watched George Zimmerman’s bond hearing as I’m sure everybody black in America did. No word on if they’re as pissed as I am with all the friggin’ commercial interruptions; but, I’m pretty certain that many of my skinfolk are upset at the outcome. Yes, George Zimmerman’s bond hearing lasted about two hours, and in the end, the judge decided to grant him the ability to post a bond to the tune of $150,00. So, how disappointed are some of my cousins about this decision? Well, I’m not sure if there are any plans to riot as of yet; when businesses in Sanford, Florida starts boarding up windows like they do in anticipation of a hurricane, then I’ll say that we’re pretty close. But until then, we can all take to social media as many are doing currently, to vent their frustrations. You know, sorta like my man Dr. Boyce Watkins did at yourblackworld.com:


What do you do when your municipality is holding arguably the most hated and notorious killer on earth?  You grant him bail.  That’s exactly what Judge Kenneth Lester did for George Zimmerman, the man who killed Trayvon Martin.  As a condition of his bail, Zimmerman is not allowed to have possession of firearms, drink alcohol or use drugs.  He must also maintain a curfew.  How nice.
Zimmerman won’t be released on Friday, but the details of his release are going to be worked out between his attorney and law enforcement.   Zimmerman has been charged with second-degree murder for the killing of Trayvon Martin, but he claims that he shot him in self-defense.
If the city of Sanford wanted to embarrass itself any further, it just did.  The justice system that has obtained international prominence as one of the most inept, irresponsible, racist and unprofessional organizations in the country has set a new standard for judicial indecency.  The family of Trayvon Martin worked hard to get Zimmerman arrested because he was a flight risk, now he’s a flight risk all over again.
Granting bail for George Zimmerman, for the most part, is a slap in the face to those around the world who worked for his arrest.  It simply says that without regard to the will of the people, those possessing the power of the state have no obligation to answer to anyone or even share whatever information they are using to come to their illogical decisions.  Granting bail to Zimmerman renders meaningless all the rallies, petitions and hard work done around the world to bring him to justice.  It effectively communicates defiance within the Sanford judicial system to say, “We don’t care what you think.  We’re going to do whatever we choose to do.”

Now when you listen to Dr. Boyce and some of the people commenting on his thread via Facebook. You get the impression that the judge allowed George Zimmerman to be released on his own recognizance. From what I’ve seen, some are upset that bond wasn’t set at a higher amount. Heck, I’ve even heard comparisons made to Michael Vick who had a much higher bond amount for basically killing some dogs. A pretty stupid comparison if you ask me. Last time I checked and as far as the court heard today, Zimmerman is no multi-millionaire NFL athlete. Plain and simple: in the eyes of the court George Zimmerman is indigent, He doesn’t own a home; his wife is a student; and, I’m not sure if an employer would want to hire Ole’ Georgie Porgie right now, or whether him punching the clock in the face of death threats would be a good idea. I don’t know about you, but it’s kinda hard to shake $150,000 out of the couch when you’re unemployed and people are trying to kill you. 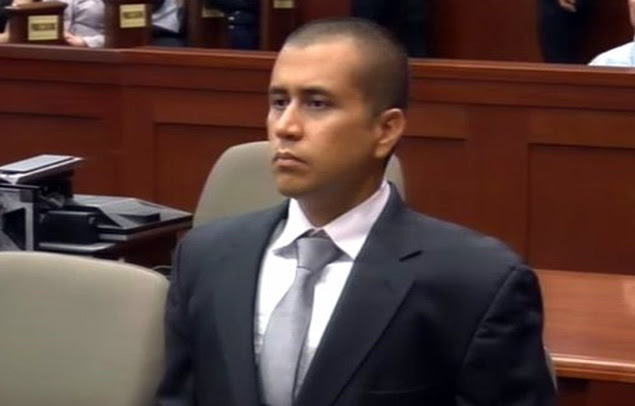 So why would Zimmerman be allowed to even have a bind hearing after killing a 17-year-old Trayvon Martin armed with Skittles and ice tea? Oh I dunno, but I think there’s this thing called the Constitution that guarantees him to such a hearing as part of the process of justice.

Yes, Zimmerman has a right to a pro forma bond hearing.  No, Zimmerman is not eligible for bond because his participation in armed vigilantism and his belief that he had a legal right to act as he did in this particular situation make him an imminent risk to other Black men wherever Zimmerman goes.  Likewise, a man who admits that he had violent sex with a woman but who claims that the sex was consensual and therefore just (a potential defense) is not necessarily entitled to sufficiently low bail so that he can walk the streets, and potentially commit the same act again, while society awaits his trial.

The effects of color-aroused thinking on the Zimmerman case are already evident.  Can anyone remember an example in which the safety of a Black man was a concern in the question of whether he should be allowed bail?  No, because it is assumed that Blacks will pose a danger to Zimmerman while whites would not pose a danger to O.J. Simpson, or if they did then who cares?
Posted by Francis Holland at 9:44 AM 10 comments:

The US Supreme Court doesn't care that death penalty sentences are often color-aroused, but state laws and state courts in North Carolina and elsewhere are recognizing this fundamental miscarriage of color-aroused injustice, reports the NYT.


FAYETTEVILLE, N.C. — Concluding that racial bias played a significant factor in a death sentence here 18 years ago, a judge on Friday ordered that it be changed to life in prison without parole, the first such decision under North Carolina’s controversial Racial Justice Act. 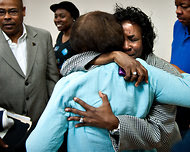 Mr. Robinson’s mother, Shirley Burns, at left, hugged a family friend after the ruling, the first under North Carolina’s Racial Justice Act.
The landmark ruling could be the first of many under the law, which allows future defendants and current death row inmates to present evidence, including statistical patterns, suggesting that race played a major role in their being sentenced to death.

Posted by Francis Holland at 6:55 AM No comments:

For New Jersey Criminal History Record Checks, you have to go to be fingerprinted by a state agency and you have to provide your home address for delivery of the record check results, so you effectively have to turn yourself in to the police before you know what's on your criminal record report.  The New Jersey State Police website explains that:

The Division of State Police, Criminal Information Unit (CIU) provides criminal history record background checks to any individual requesting a copy of his/her own record. A personal record request is typically for the purpose of:


Here is a link to the PDF form on which members of the public apply for individual records on themselves.

A lot of people (though not you, probably, because you're special) have forgotten many of their arrests, particularly if they got into a lot of trouble as young people or if they used drugs and alcohol and whole periods of their life are a blank to them, including the recent past.  They don't remember when they got arrested, whether they went to court, whether they had representation and what the result of an interaction with the police was.

That's why I always did FBI criminal history checks on immigration clients before I filed any immigration applications on their behalf.  If they had a criminal history, then I might be effectively requesting that they be deported by filing a form on behalf of someone who had a deportable offense on their record.

The above is not legal advice or representation.  If you want proof of your criminal history or lack thereof, then get yourself a lawyer so that you don't accidentally end up in jail or deported ("removed").
Posted by Francis Holland at 6:47 AM No comments:

Black fireman says he was abused and Tasered by Met 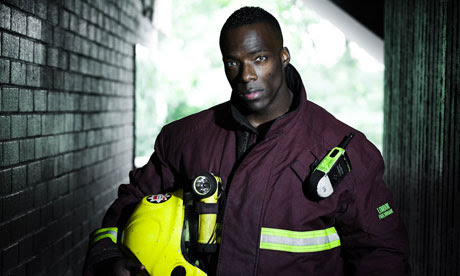 Edric Kennedy-Macfoy's complaint is the 10th case involving alleged racism known to have been referred to the police watchdog in three weeks. Photograph: Casey Moore

Scotland Yard is facing a new case of alleged police racism after a black firefighter who tried to assist officers while off duty claimed he was targeted because of his skin colour, abused, assaulted and shot with a stun gun.

The complaint lodged by Edric Kennedy-Macfoy, 28, from north London, is the 10th case involving alleged racism known to have been referred to the official police watchdog in the last three weeks.

Kennedy-Macfoy was driving through Harrow around 3.30am on 4 September when he saw a young man hurl a rock at a police van. After noting a description of the young man, Kennedy-Macfoy, who also trained as a police constable, flagged down the van driver and approached a line of officers to pass the information on.

He said he was horrified at their response, which he alleges included officers behaving like "wild animals": swearing at him, dragging him from his car, subjecting him to a "violent" attack and eventually shooting him with a stun gun.

Read the full Guardian story.
Posted by Black Women in Europe at 1:00 AM No comments: