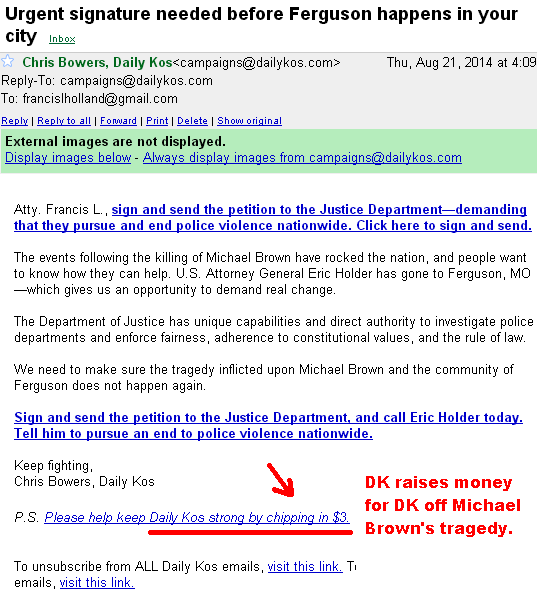 Although the DailyKos e-mail requests donations to DailyKos, it does not mention the Michael Brown Memorial Fund at Go Fund Me, created to receive donations for the benefit and education of Michael Brown's siblings. 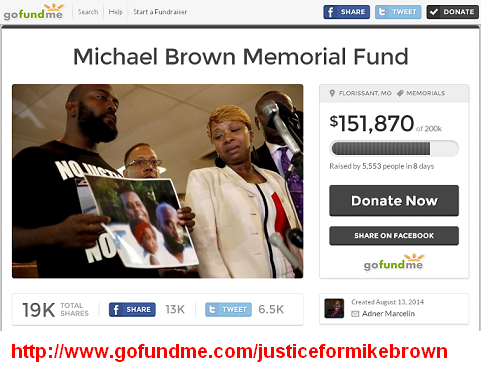 This appears to me to be rank opportunism on the part of DailyKos.  A 97% white readership blog seeks to raise money for its own coffers, hijacking efforts started and daily maintained by humble Black protesters, Black elected officials and community leaders, online Black Tweeters and advocacy groups.

Although it might otherwise be commendable for DailyKos to take a position in this case, it could have better helped to promote the much discussed "conversation" on skin color by linking to and directing contributions through the Black organization Color of Change, instead of linking to the white organization ActBlue while requesting donations for the virtually all-white DailyKos.

It is my contention that making any contribution to DailyKos only supports and encourages the blog apartheid that DailyKos has practiced since its inception.

Although the argument has been raised that DailyKos cannot be a white anti-Black antagonist blog because its owner is Latino, Markos Moulitsas has specifically disavowed being any kind of minority in the past. http://goo.gl/FxDzbd

In the fifth article of a series of four commissioned articles for his college newspaper, Markos C. A. Moulitsas, announced his intention to withdraw again into "detached selfishness", grateful that he was not one of "them" (the minorities),


whose skin color or religious persuassion (sic) made them the target of bigotry and discrimination. They would never be able to escape who they were.  (Emphasis added.)