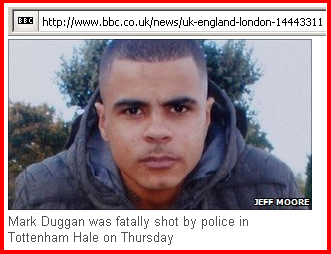 The Great Britain website The Guardian reports that the, Mark Duggan, a "29-year-old father-of-four was shot by police during an attempted arrest in Tottenham, north London, on Thursday," but there is suspicion that the police had decided to execute Duggan before the stopped him, or made that decision at the scene.  The Guardian also ran a story today whose title and subtitle say:


Explaining the initials and role of the IPCC, the agency's website says:


The IPCC was established by the Police Reform Act and became operational in April 2004. Its primary statutory purpose is to increase public confidence in the police complaints system in England and Wales.

The IPCC also investigates the most serious complaints and allegations of misconduct against the police in England and Wales, as well as handling appeals from people who are not satisfied with the way police have dealt with their complaint.

Just as some of the rioters must have believed during the riots before the IPCC report was released today, Mr. Duggan may not have been shot in the chest by police for any justifiable reason.


Speculation that Mr Duggan was "assassinated" in an execution style involving a number of shots to the head was "categorically untrue", the commission added.

Mr Duggan's brother Shaun Hall told Sky News that the family was "devastated" by his death and dismissed as "utter rubbish" claims he had shot at police.

Certainly, the suspicion that Mark Duggan was assassinated by police might be fueling riots, just as shooting such as this one triggered riots in the United States in the 1960's and early 1970's.  One white female British blogger, whose blog is called "Penny Red," describes the riots that seem to have taken over Great Britain in recent days:


I’m huddled in the front room with some shell-shocked friends, watching my city burn. The BBC is interchanging footage of blazing cars and running street battles in Hackney, of police horses lining up in Lewisham, of roiling infernos that were once shops and houses in Croydon and in Peckham. Last night, Enfield, Walthamstow, Brixton and Wood Green were looted; there have been hundreds of arrests and dozens of serious injuries, and it will be a miracle if nobody dies tonight. This is the third consecutive night of rioting in London, and the disorder has now spread to Leeds, Liverpool, Bristol and Birmingham. Politicians and police officers who only hours ago were making stony-faced statements about criminality are now simply begging the young people of Britain’s inner cities to go home. Britain is a tinderbox, and on Friday, somebody lit a match. How the hell did this happen? And what are we going to do now?

The Guardian provides additional details showing that the police vigilance and killing of Mark Duggan was not an ordinary traffic stop, but a well-planned confrontation:


A father of three died instantly after an apparent exchange of fire when police attempted to arrest him in north London, it emerged on Friday.

A police marksman escaped with his life when a bullet lodged in his radio during the confrontation that ended in the death of Mark Duggan, 29. The Scotland Yard firearms officer was taken to hospital and later released.

The Independent Police Complaints Commission, which is investigating the fatal shooting, said the bullet and a non-police-issue handgun found at the scene had been sent for forensic tests.

IPCC investigators believe two shots were fired by an armed officer. A spokesman for the IPCC said that at around 6.15pm on Thursday officers from Operation Trident, the Metropolitan police unit that deals with gun crime in London's black communities, with officers from the Specialist Firearms Command (CO19), stopped a minicab to carry out a pre-planned arrest. (Emphasis added.)

How did a pre-planned arrest of a man believed to be armed nonetheless result in a "shoot-out"?  The perception, and the belief among rioters that police should not execute members of the public, might be the simple explanation of why Blacks and others are rioting in Great Britain.  Now that an official agency reports that the victim didn't fire at police, the riots could continue and even spread.


As I write, the looting and arson attacks have spread to at least fifty different areas across the UK, including dozens in London, and communities are now turning on each other, with the Guardian reporting on rival gangs forming battle lines. It has become clear to the disenfranchised young people of Britain, who feel that they have no stake in society and nothing to lose, that they can do what they like tonight, and the police are utterly unable to stop them. That is what riots are all about.

Posted by Francis Holland at 4:40 PM

That is seriously sad. Extremely tragic any way you look at it.